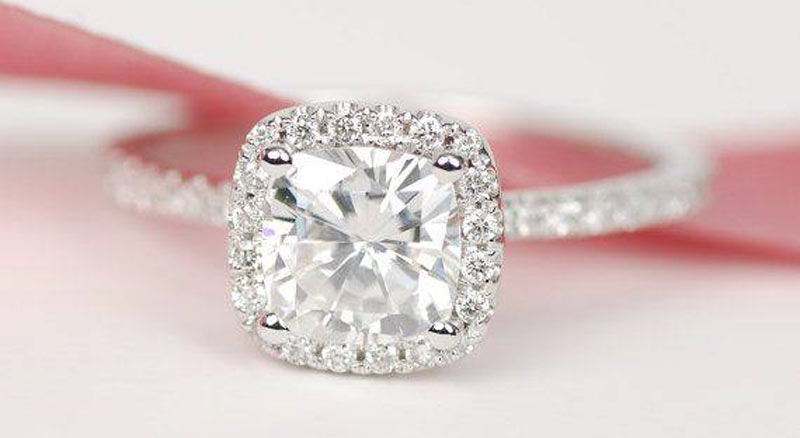 Are you looking for a diamond stimulant for your engagement ring or wedding band?

Why don’t try moissanite wedding band with the same diamond looks but not the cost?

Although moissanite has got spiked popularity in the recent few years, still many people are entirely clueless about what the moissanite actually is? Here in this article, every essential detail regarding moissanite has been outlined.

In 1893, Henri Moissan discovered moissanite in a meteor crater in Arizona. Initially, it was misunderstood for a diamond but later realized that moissanite was a rock. Basically, it is made up of the mineral silicon carbide. It is sporadic in nature as it is mainly the part of meteorites and occurs naturally in very few places in the upper mental rocks of Earth. The connection of moissanite with the outer space makes it a space diamond is commonly known as ‘’stardust’’.

Due to its rare nature, almost all of the moissanite available in the market are lab-created. The strong covalent bonding in silicon carbide holds the crystalline structure of moissanite together. This bonding makes it very hard to bear high temperature and pressure similarly like a diamond. It is sturdy, long-lasting, white, and shiny like a diamond, but still, moissanite is very different from the diamond in every aspect.

Both are very much identical in appearance, and for an average person telling them apart is quite a difficult task. In terms of the brilliance value of the refractive index (RI) for moissanite is higher (2.56) than the diamond (2.42). Diamond sparkles with depth as a combined result of light dispersion, brilliance, and scintillation. On the other side, moissanite creates a rainbow effect with colorful and fiery brilliance and a noticeable faceting pattern.

Diamonds are graded by 4Cs; color, cut, carat, and clarity, while the grading of moissanite is based upon single C that is its color. For diamonds, its cuts are the main feature that defines its brilliance while the moissanite id generally flawless, and their internal characteristics do not affect the clarity of stove visibly. Moissanite is available in three color grades on the market.

The colorless range of moissanite is expensive than the remaining two ranges.

For moissanite rings, durability is a critical factor. These pieces of jewels are intended to be worn on a regular basis, and people wish it to be resistant to breaking and scratching. Diamond has the highest Mohs rating (10.0) and considered the hardest natural substance. Moissanite is not far behind to diamond, and it also has an excellent Mohs rating of 9.25 that makes it equally scratch resistant like a diamond and it bears life’s hard knocks with strength without any abrasion or damage.

I hope now you know moissanite in a better way, and its cost-effective nature surely inspires you to use it as an ideal replacement of diamond in any type of jewelry.